ABP Framework has been designed with testability in mind. There are some different levels of automated testing;

Integration tests have some significant advantages compared to unit tests;

While they have some drawbacks;

We suggest to go mixed: Write unit or integration test where it is necessary and you find effective to write and maintain it.

The Application Startup Template comes with the test infrastructure properly installed and configured for you.

See the following solution structure in the Visual Studio: 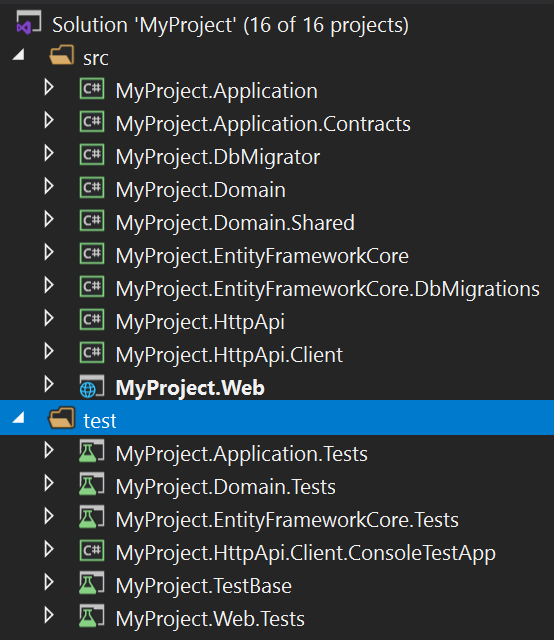 There are more than one test project, organized by the layers;

The following sections will introduce the base classes and other infrastructure included in these projects.

The startup solution has the following libraries already installed;

While you are free to replace them with your favorite tools, this document and examples will be base on these tooling.

You can use the Test Explorer to view and run the tests in Visual Studio. For other IDEs, see their own documentation.

Open the Test Explorer, under the Tests menu, if it is not already open: 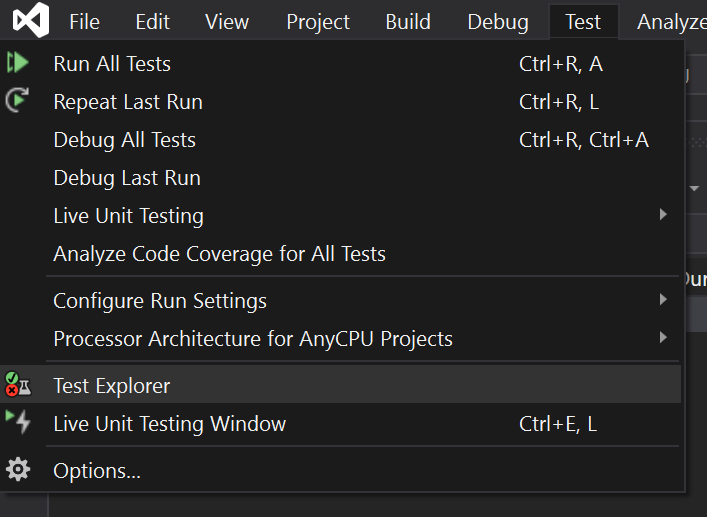 Then you can click to the Run All or Run buttons to run the tests. The initial startup template has some sample tests for you:

To enable it, click to the caret icon near to the settings (gear) button and select the Run Tests In Parallel.

For Unit Tests, you don't need to much infrastructure. You typically instantiate your class and provide some pre-configured mocked objects to prepare your object to test.

In this simplest case, the class you want to test has no dependencies. In this case, you can directly instantiate your class, call its methods and make your assertions.

Assume that you've an Issue entity as shown below:

Notice that the IsClosed and CloseDate properties have private setters to force some business rules by using the Open() and Close() methods;

[Fact] attribute is defined by the xUnit library and marks a method as a test method. Should... extension methods are provided by the Shouldly library. You can directly use the Assert class of the xUnit, but Shouldly makes it much comfortable and straightforward.

When you execute the tests, you will see that is passes successfully:

Assert.Throws checks if the executed code throws a matching exception.

See the xUnit & Shoudly documentations to learn more about these libraries.

If your service has dependencies and you want to unit test this service, you need to mock the dependencies.

Assume that you've an IssueManager Domain Service that is defined as below:

IssueManager depends on the IssueRepository service, that will be mocked in this example.

Business Rule: The example AssignToUserAsync doesn't allow to assign more than 3 (MaxAllowedOpenIssueCountForAUser constant) issues to a user. If you want to assign an issue in this case, you first need to unassign an existing issue.

The test case below tries to make a valid assignment:

Let's add a second test to see if it prevents to assign issues to a user more than the allowed count:

For more information on the mocking, see the NSubstitute documentation.

xUnit creates a new test class instance (IssueManager_Tests for this example) for each test method. So, you can move some Arrange code into the constructor to reduce the code duplication. The constructor will be executed for each test case and doesn't affect each other, even if they work in parallel.

Example: Refactor the IssueManager_Tests to reduce the code duplication

You can also follow the web application development tutorial to learn developing a full stack application, including the integration tests.

ABP Provides a complete infrastructure to write integration tests. All the ABP infrastructure and services will perform in your tests. The application startup template comes with the necessary infrastructure pre-configured for you;

The startup template is configured to use in-memory SQLite database for the EF Core (for MongoDB, it uses Mongo2Go library). So, all the configuration and queries are performed against a real database and you can even test database transactions.

Tip: Do not use EF Core's In-Memory database for advanced integration tests. It is not a real DBMS and has many differences in details. For example, it doesn't support transaction and rollback scenarios, so you can't truly test the failing scenarios. On the other hand, In-Memory SQLite is a real DBMS and supports the fundamental SQL database features.

Writing tests against an empty database is not practical. In most cases, you need to some initial data in the database. For example, if you write a test class that query, update and delete the products, it would be helpful to have a few products in the database before executing the test case.

ABP's Data Seeding system is a powerful way to seed the initial data. The application startup template has a YourProjectTestDataSeedContributor class in the .TestBase project. You can fill it to have an initial data that you can use for each test method.

Example: Create some Issues as the seed data

Also created a static class to store the User Ids:

In this way, we can use these known Issues and the User Ids to perform the tests.

AbpIntegratedTest<T> class (defined in the Volo.Abp.TestBase package) is used to write tests integrated to the ABP Framework. T is the Type of the root module to setup and initialize the application.

The application startup template has base classes in each test project, so you can derive from these base classes to make it easier.

See the IssueManager tests are re-written as integration tests

This class typically locates in the .Domain.Tests project since it tests a class located in the .Domain project. It is derived from the MyProjectDomainTestBase which is already configured to properly run the tests.

Writing such an integration test class is very straightforward. Another benefit is that you won't need to change the test class later when you add another dependency to the IssueManager class.

Testing an Application Service is not so different. Assume that you've created an IssueAppService as defined below:

Now, you can write a test class inside the .Application.Tests project:

It's that simple. This test method tests everything, including the application service, EF Core mapping, object to object mapping and the repository implementation. In this way, you can fully test the Application Layer and the Domain Layer of your solution.

Dealing with Unit of Work in Integration Tests

ABP's unit of work system controls the database connection and transaction management in your application. It seamlessly works while you writing your application code, so you may not aware of it.

In some cases, you may need to manually control the unit of work scope. Consider the following test method:

We are using _issueRepository.GetQueryableAsync to obtain an IQueryable<Issue> object. Then, we are using the FirstOrDefaultAsync method to query an issue by its title. The database query is executed at this point, and you get an exception indicating that there is no active unit of work.

To make that test properly working, you should manually start a unit of work scope as shown in the following example:

We've used the IUnitOfWorkManager service to create a unit of work scope, then called the FirstOrDefaultAsync method inside that scope, so we don't have the problem anymore.

Note that we've tested the FirstOrDefaultAsync to demonstrate the unit of work problem. Normally, as a good principle, you should write tests only your own code.

In some cases, you may want to directory work with the Entity Framework's DbContext object to perform database operations in your test methods. In this case, you can use IDbContextProvider<T>service to obtain a DbContext instance inside a unit of work.

The following example shows how you can create a DbContext object in a test method:

Just like we've done in the Dealing with Unit of Work in Integration Tests section, we should perform DbContext operations inside an active unit of work.

For MongoDB, you can use the IMongoDbContextProvider<T> service to obtain a DbContext object and directly use MongoDB APIs in your test methods.

In general, there are two types of UI Tests;

Such tests completely depends on your UI Framework choice;

Visual Tests are used to interact with the application UI just like a real user does. It fully tests the application, including the visual appearance of the pages and components.

Visual UI Testing is out of the scope for the ABP Framework. There are a lot of tooling in the industry (like Selenium) that you can use to test your application's UI.