In order to accomplish these goals, ABP Framework;

All the themes must depend on the Volo.Abp.AspNetCore.Components.WebAssembly.Theming NuGet package, so they are indirectly depending on the following libraries:

Bootstrap's JavaScript part is not used since the Blazorise library already provides the necessary functionalities to the Bootstrap components in a native way.

All themes must define a layout for the application. The following image shows the user management page in the Basic Theme application layout:

And the same page is shown below with the Lepton Theme application layout:

As you can see, the page is the same, but the look is completely different in the themes above.

A theme is simply a Razor Class Library.

The easiest way to create a new theme is to copy the Basic Theme Source Code and customize it. Once you get a copy of the theme in your solution, remove the Volo.Abp.AspNetCore.Components.WebAssembly.BasicTheme NuGet package and reference to the local project.

A theme generally needs to add a global style to the page. ABP provides a system to manage the Global Styles and Scripts. A theme can implement the IBundleContributor to add global style or script files to the page.

Example: Adding a style to the page

styles.css file should be added into the wwwroot folder of the theme project for this example. When you use the abp bundle command, this class is automatically discovered and executed to add the style to the page.

See the Global Styles and Scripts document for more.

A typical Layout consists of several parts. The theme should include the necessary parts in each layout.

Example: The Basic Theme has the following parts for the Application Layout 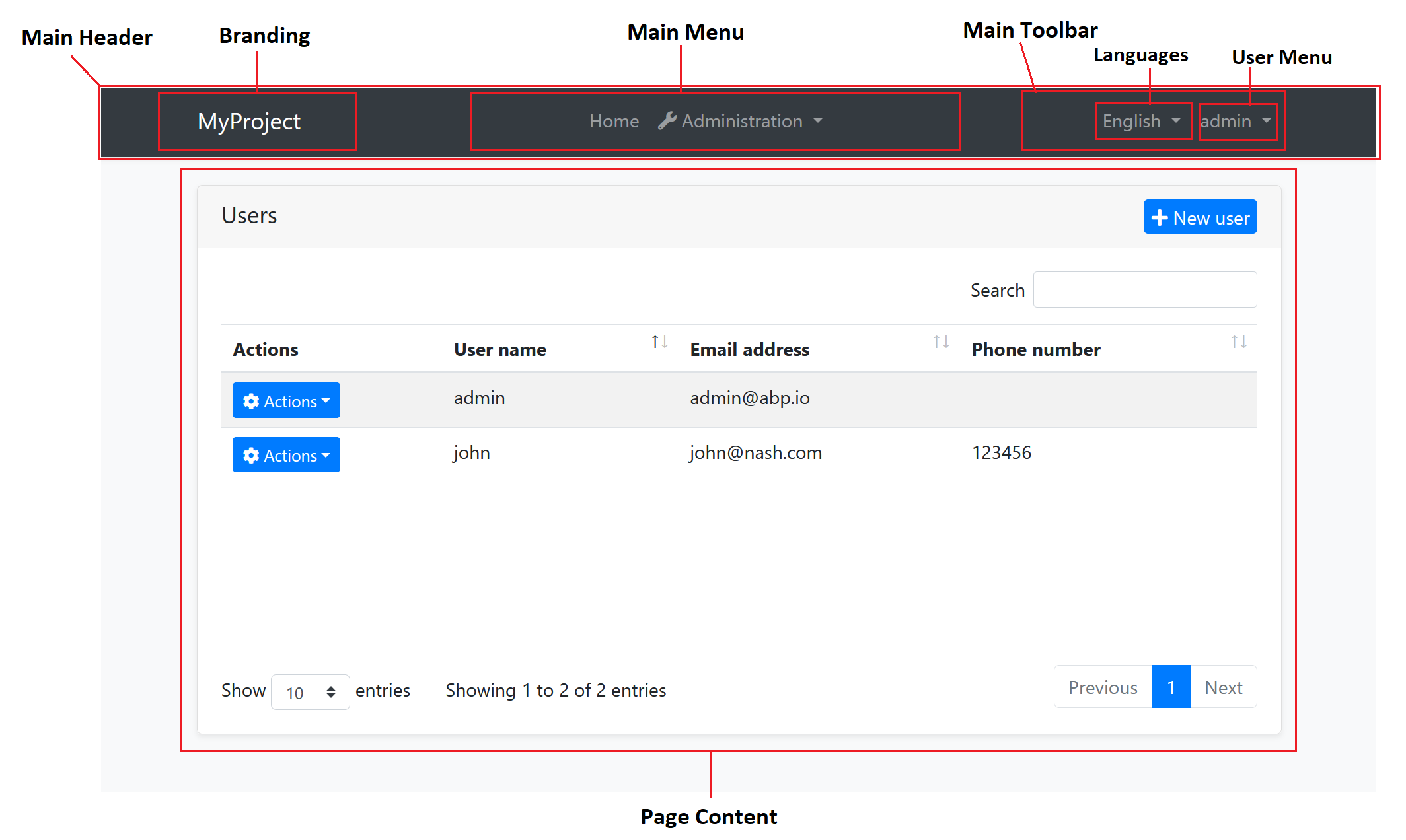 The following sections explain the fundamental parts pre-defined by the ABP Framework and can be implemented by the themes.

It is a good practice to split the layout into components/partials, so the final application can override them partially for customization purpose.

IBrandingProvider service should be used to get the name and the logo URL of the application to render in the Branding part.

The Application Startup Template has an implementation of this interface to set the values by the application developer.

IMenuManager service is used to get the main menu items and render on the layout.

Example: Get the Main Menu to render in a razor component

See the Navigation / Menus document to learn more about the navigation system.

See the Toolbars document to learn more on the toolbar system.

The theme has a responsibility to add two pre-defined items to the main toolbar: Language Selection and User Menu. To do that, create a class implementing the IToolbarContributor interface and add it to the AbpToolbarOptions as shown below:

Language Selection toolbar item is generally a dropdown that is used to switch between languages. ILanguageProvider is used to get the list of available languages and CultureInfo.CurrentUICulture is used to learn the current language.

Local Storage is used to get and set the current language with the Abp.SelectedLanguage key.

Example: Get the currently selected language

The theme should reload the page after changing the language:

User menu includes links related to the user account. IMenuManager is used just like the Main Menu, but this time with StandardMenus.User parameter like shown below:

ICurrentUser and ICurrentTenant services can be used to obtain the current user and tenant names.

IAlertManager service is used to get the current page alerts to render on the layout. See the Page Alerts document to learn more.